NewMusicSA presents the second concert of the Digital Indaba 2022 Concert Series with a programme celebrating the 70th anniversary of South African composer Michael Blake. London-based Australian pianist Antony Gray will premiere in South Africa Blake’s new work Afrikosmos on Saturday 24 September at the Chisholm Recital Room of UCT’s SA College of Music in Cape Town. The concert will be recorded and streamed online through NewMusicSA´s social media platforms, and it will be preceded by an open workshop in the morning of the concert.

Michael Blake’s Afrikosmos is a compendium of 75 progressive African piano pieces in six volumes, currently being published in the UK and recorded by Antony Gray in a 3-CD set, soon to be released. Blake has been creating these characteristically African pieces over the past 5 years. The project was started in the Italian town of Bellagio in June 2015 at the Rockefeller Writers Centre, whose contribution is gratefully acknowledged. As Blake explains:

“The idea of writing an African response to Bartók’s Mikrokosmos has a long genesis. A parallel idea of writing a manual for composers of New African or neo-African Music came about later, and given that Bartók’s collection provides a valuable compendium of compositional techniques, bringing these two projects together seemed to make practical sense. A manual for composers that references the piano pieces found in these six volumes will also be published in due course.

I chose not to replicate the kind of technical exercises Bartók included for didactic purposes. But I did follow his method in starting with the simplest pieces and working via the graded exam system to reach the more advanced pieces in the final volume. And I did explore in as comprehensive a way as possible the enormous range of traditional music from much of sub-Saharan Africa. While a few pieces are piano transcriptions of existing music, most pieces are either written in a neo-African style, or relate to my own aesthetic which has drawn on African musical material and aesthetics since the mid-1970s.”

Praised as “the Béla Bartók of South Africa” (La Nación, Buenos Aires, September 2001)”, Michael Blake is one of the most eminent South African contemporary classical music composers. Born in Cape Town, Blake studied in Johannesburg (BMus) and London (MMus) and received his doctorate from Rhodes University, Grahamstown. He moved to Europe in 1977 and was based in London before returning to South Africa in 1998, where he taught composition at Rhodes University, established NewMusicSA and its New Music Indaba, and negotiated South Africa’s re-entry into the ISCM after an absence of nearly four decades.

In 2000 he set up “Growing Composers”, a project to empower young black composers, and in 2012 its successor, the annual Sterkfontein Composers Meeting. From 2002-2009 he devised and curated the “Bow Project”, commissioning string quartet responses to traditional uhadi bow music, resulting in a CD production. His musical language is partly the result of an immersion in the materials and playing techniques of African music, but also drawing on virtually any found material, and is guided by both experimental film and African weaving techniques.

His works have been widely played, in Toronto, New York, Havana, Buenos Aires, Mexico, Australia, India, Japan, and throughout Europe and Africa, and now appears on some 15 CDs. He lives in rural France with his wife, musicologist and writer Christine Lucia, and their Breton spaniel Dollie, but spends part of each year in Cape Town, where he is honorary professor in the Africa Open Institute at Stellenbosch University. In October 2022 his first Symphony will be premiered in Germany.

Antony Gray is an Australian pianist. He has recorded Bach, Goossens, Williamson, Carmichael, Brahms and Poulenc for ABC Classics and lots of Saint-Saens for Divine Art. He has recently recorded a couple of discs of music written for teacher and student, with his students. He won’t be doing that again (also Divine Art). He also teaches the violin, and hopes one day to be able to play it himself, makes delicious beetroot wine and has been trying for years, and without success, to grow artichokes. He has homes in London and Marrakech.

The London based Australian pianist has long been regarded as one of the most interesting and communicative performers of his generation. His career to date has encompassed solo and chamber music performances around the world, as well as regular recordings for CD and radio. He has been a (selective) champion of contemporary and, and has premiered many pieces written for him. He has also championed many neglected composers such as Enescu, Dussek, Martinu and Malcolm Williamson.

Gray will also be performing selected pieces of his Il Maestro e lo Scolare four-hand project, to which Blake contributed a short set of pieces (7‘), Audiences can expect Blake and Gray playing these together at some point.

Notes for the Editor
NewMusicSA is a non-profit arts advocacy organisation that promotes the creation, performance, and enjoyment of South African new music. Founded in 1999 and operating formally since 2003, NewMusicSA is the South African section (and current only African section) of the International Society for Contemporary Music (ISCM). NewMusicSA is supported by the Oppenheimer Memorial Trust and the Rupert Music Foundation. For more information please visit our website www.newmusicsa.org.za, follow @NewMusicSA on Twitter at www.twitter.com/NewMusicSA or like @NewMusicSA on Facebook at www.facebook.com/NewMusicSA. 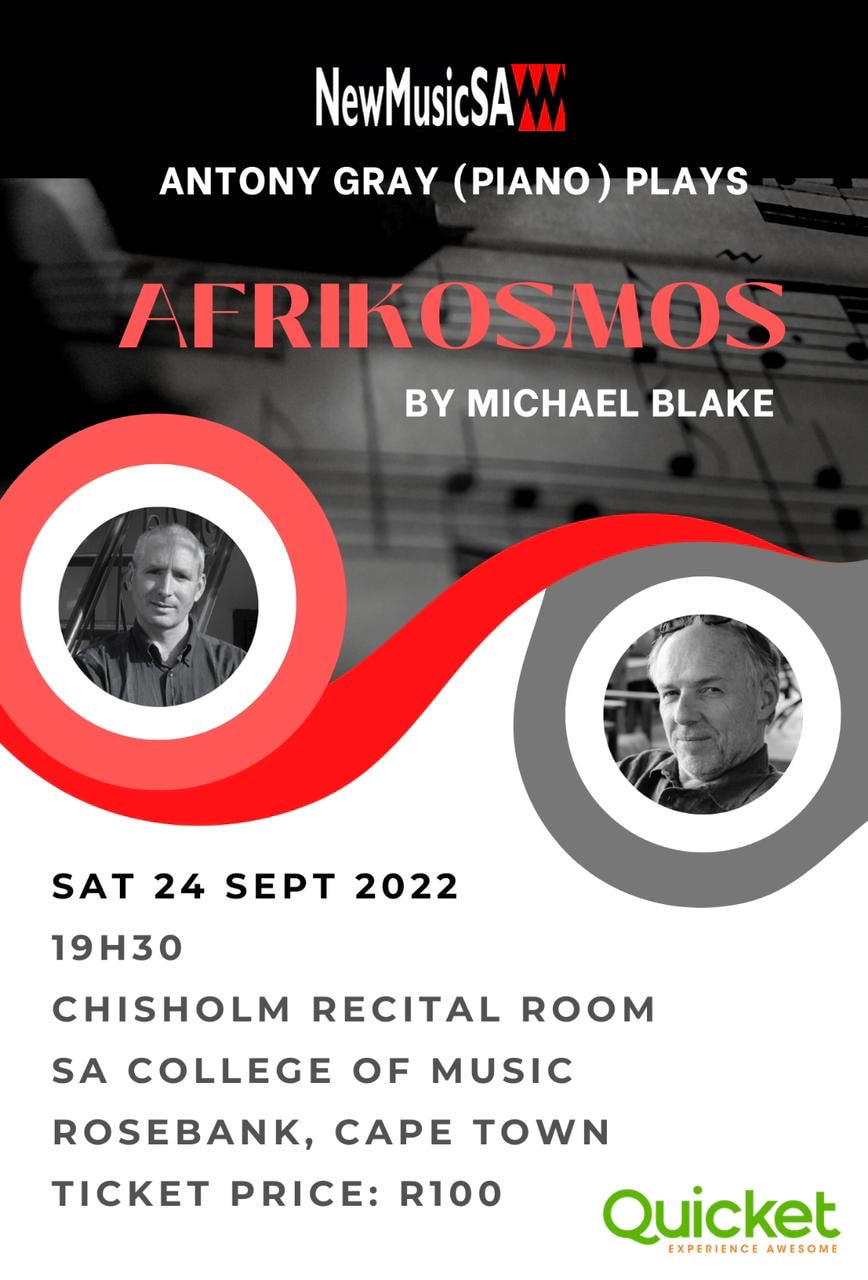